Burndown Charts are often associated with Scrum, a development methodology known for incremental releases and a focus on customer requirements. As an agile workflow tool, they help teams meet deadlines more predictably by providing an early indicator of how a project is coming along.

Because they provide a visualization of complete and remaining work, they're also a user-friendly reporting tool for GitHub project management.

Just like kanban boards and epics, burndown reports can help you visualize projects across repositories. In ZenHub, each ZenHub sprint gets its own burndown report. 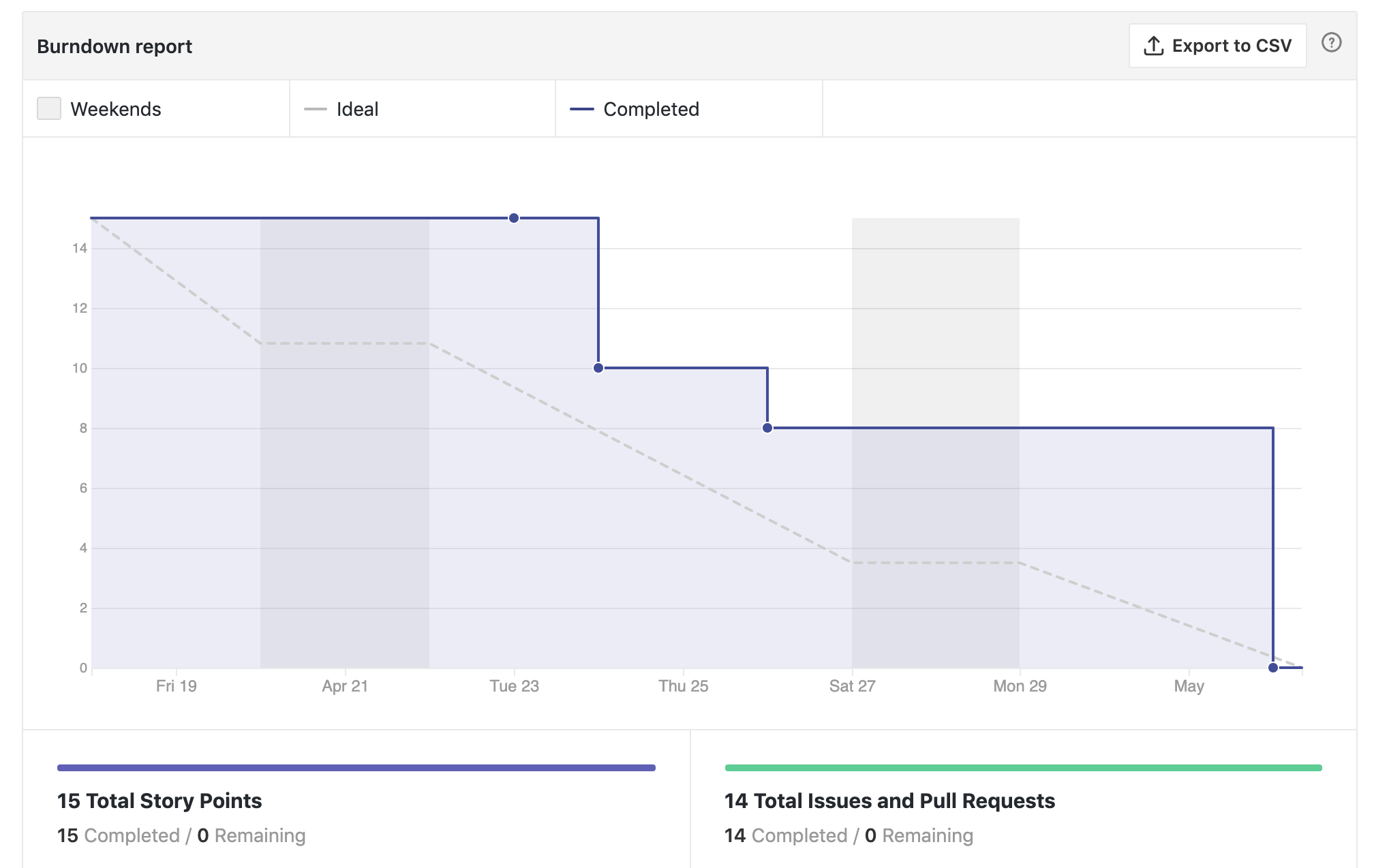 Burndown reports are meant to track velocity during short sprints of work – and as such, they are integrated directly with your ZenHub sprints. You'll find your team's burndown report in the Reports tab. To build your report, you'll need to have a start and end date set for your ZenHub sprint, and the issues which have been estimated will be shown.

ZenHub sprints allow you to build automatic sprint schedules that create and close by themselves. Once you set up your first sprint schedule and duration, we'll automatically create all future sprints including the start and end dates. Learn more here!

With a start and end date selected, you need to ensure there are estimated Issues that are added to the sprint. If you haven't yet added estimated Issues to the sprint or estimated the issues within the sprint, you'll see an empty state. New to estimation and need best practices? Check out our blog post 'Introduction to Burndown Chart in Agile Software Development' where we cover how to estimate in ZenHub. 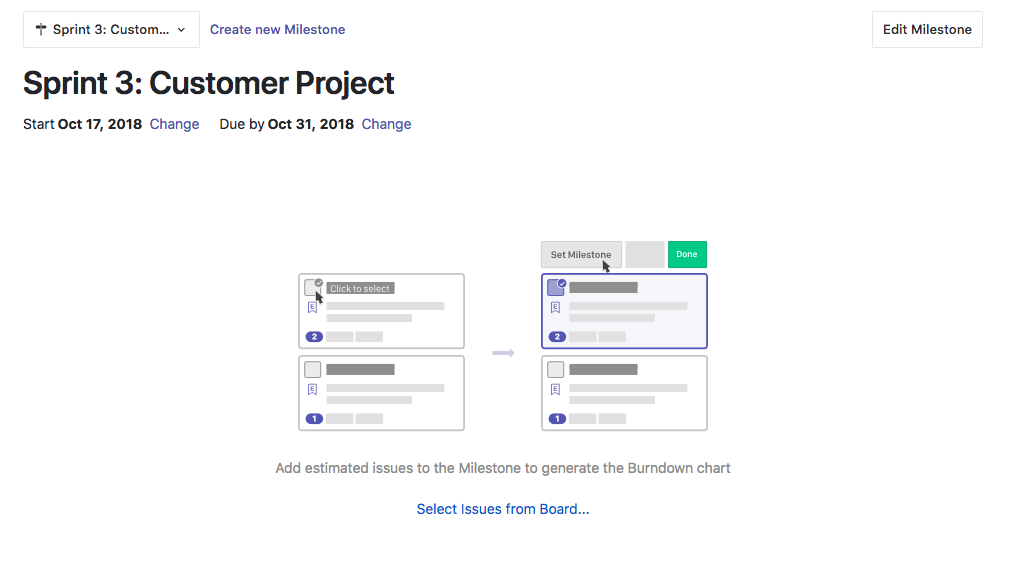 Adding issues to your sprint en-bulk

Head back to the board tab to organize the sprint. You can use the multi-action to select multiple issues to be added to the sprint, or, estimated if you forgot to estimate an issue but discussed it as a team.

The Burndown will auto-populate data points as issues are closed

As you finish issues assigned to the sprint, a new data point will appear, "stepping down" in the chart. 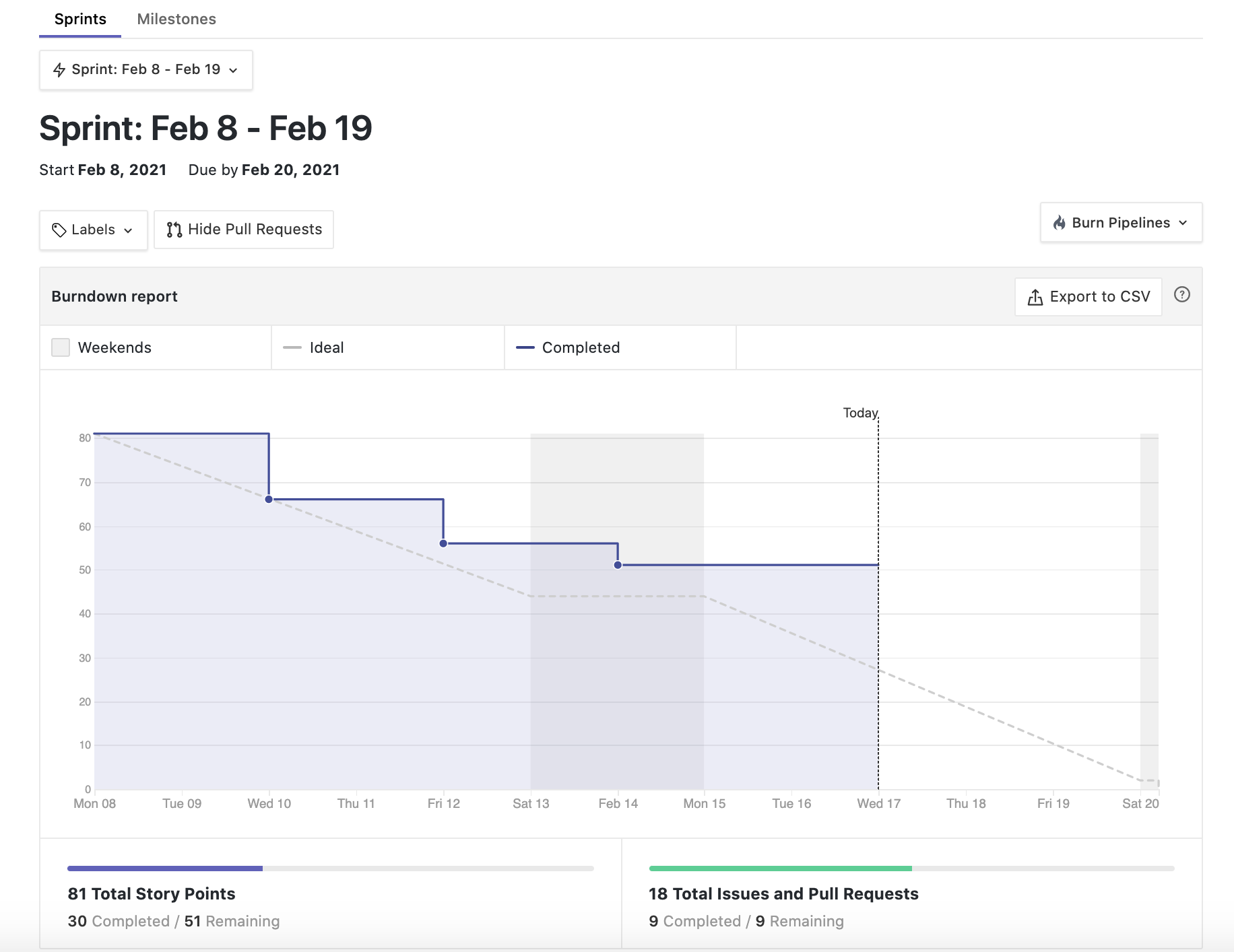 Along the middle of the graph is a light-gray, dotted line—This line represents the speed at which you need to be closing or completing issues within your sprint to complete all issues you've set out to achieve in the sprint. You can be confident you’ll achieve your goal if your team’s completed work closely aligns to this diagonal timeline.

With ZenHub sprints, Issues can be included in multiple sprints. For any issue that might not have been completed during the cycle, and carried over to the next, there will be a list of "Incomplete issues".  Issues that are closed outside the start/end times of the sprint are considered incomplete.

You will see a list of all the issues (both estimated and unestimated) that have been added to your sprint. These issues will be divided into three separate sections:

2. Completed issues and PRs: This will display all issues that have been closed for the current sprint

3. Incomplete issues and PRs that were not completed by the end of the sprint: This will display all issues (both open and closed) that were not closed during the sprint cycle (i.e these issues were closed outside the start and end dates set for the Sprint)

By default, burndown reports display closed issues and PRs as data points. You can also customize which pipeline triggers a “burned” task by using the burn pipelines dropdown menu. For example, if your development team considers a task complete when it reaches the “Ready for QA” pipeline, they can set that here for a more accurate picture of their priorities and progress. 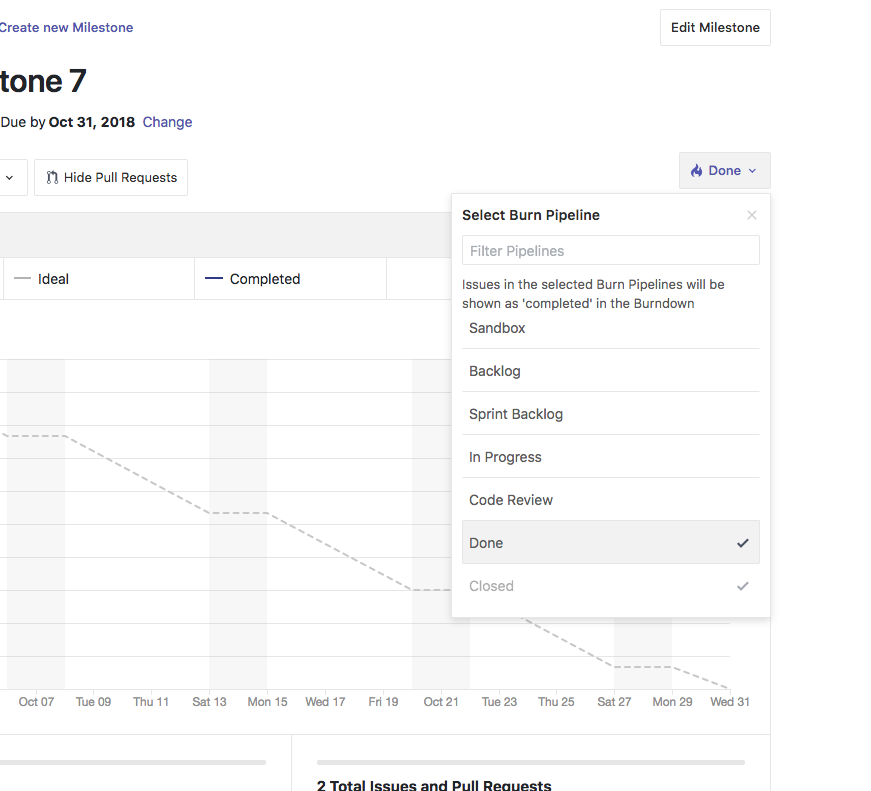 Filtering the Burndown: What sprints appear

Currently, the ZenHub Burndown report will be available for the last 10 closed sprints. If a sprint is too old, you won't be able to pull up the previous burndown reports. If you need to save this information, we request using the print-page functionality of your Browser, or leveraging our 'Export to CSV' option for further analysis and customization

When viewing a burndown report, you can export the report to CSV to further customize and analyze data. To export your report, navigate to to your burndown report where there is an Export to CSV option located in the top right of the Report page next to the Report title. The fields included in the export are: 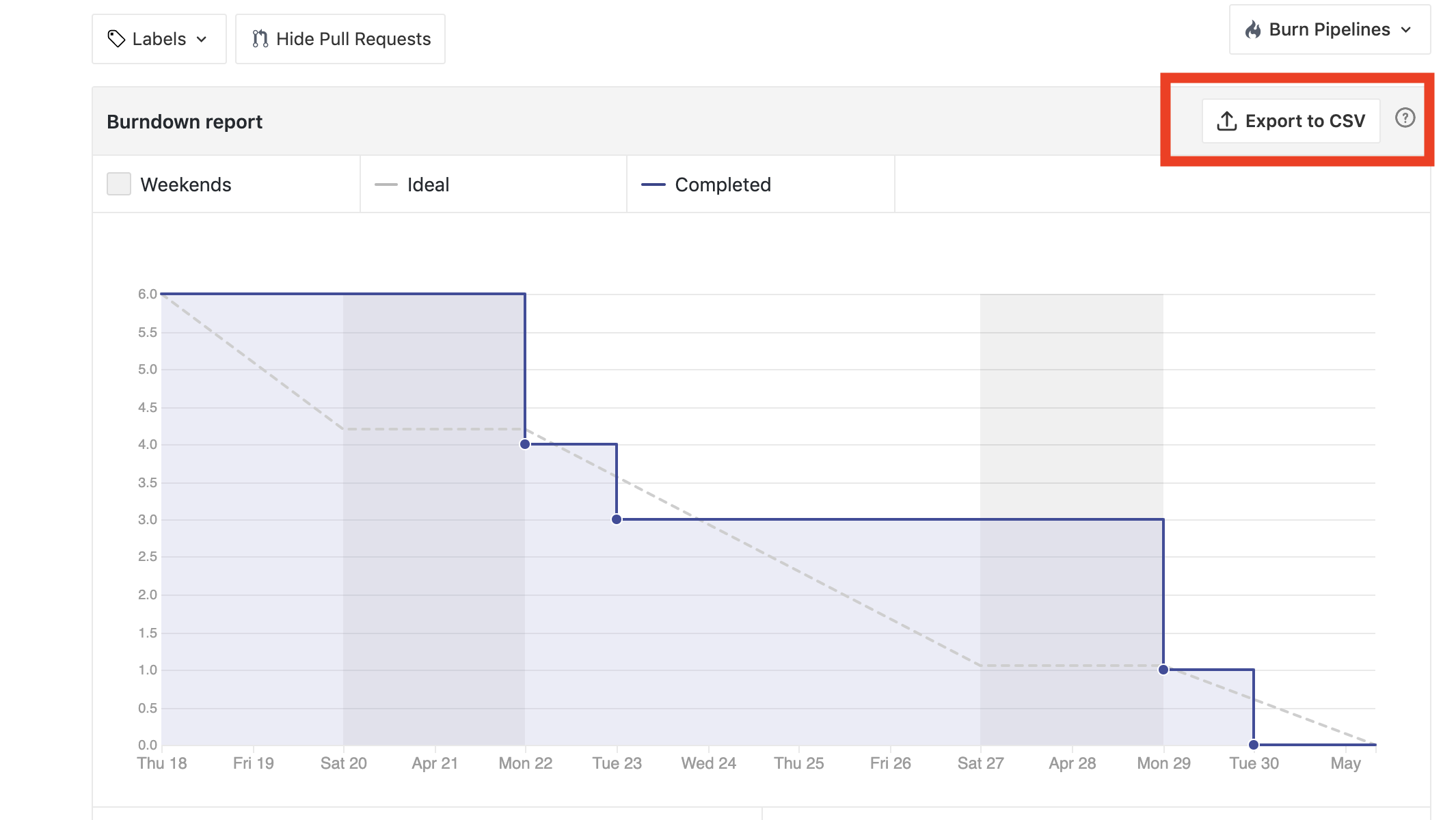